TOLEDO, Ohio (Feb. 24, 2016) – SCOTT Rookie of the Year contender Brandon Lynn learned the hard way at Daytona, but at least he learned.

“I learned one thing…as soon as you get away from the big pack, you’ve got nothing,” said Lynn, driver of the No. 36 Lira Motorsports Ford.

“After I got that penalty with the gas can, I could never get bunched up with the lead pack again. That was pretty much the end of our day.” 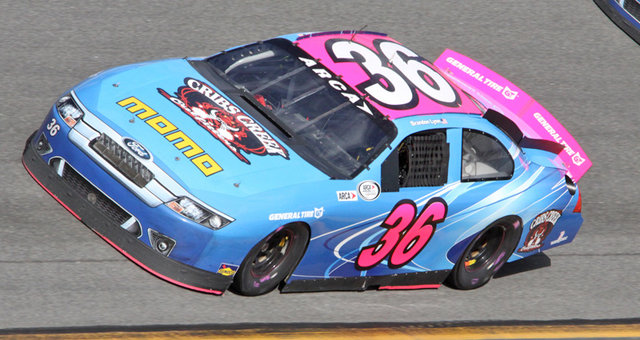 Maybe the “end of our day” in regards to winning the race, but Lynn still left the stadium with a clean race car and a 16th-place finish on the lead lap. Not too bad for his maiden voyage at the “World Center of Racing”.

“Daytona was so much fun…riding around in the draft with the pack all bunched up. What an awesome experience…what a privilege.”

With Daytona in the mirror, it’s onto Fairgrounds Speedway Nashville for the next race on tour coming April 8-9. Like most of the tracks on the ARCA Racing Series presented by Menards circuit, he’s never seen the place before.

In the meantime, Lynn, a UNC Charlotte junior studying Business Management, is doing everything he can to get prepared for the full-pull ahead.

“I’ve been working out every morning…getting in better shape to be a lot more competitive in the long run. I’m helping out at the shop when I’m not in school. That’s key for me…to keep learning as much as I can about these cars, what’s going on under the car as much as in it. I want to learn more so I can help my crew chief (Bryan Quanz) more on race day…give the right feedback. 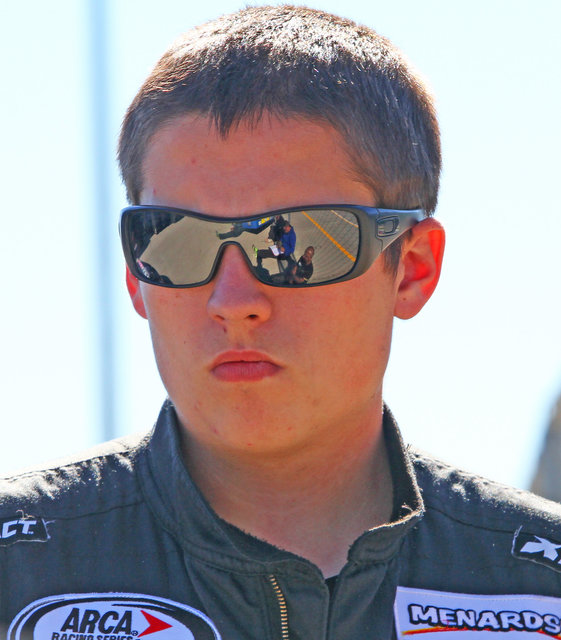 “Bryan and I have a really good bond…he’s from the same area I am. I think we have a really healthy connection, and I’m determined to build a good relationship for the season.”

In addition to school, shop, and working out, Lynn is also a major component in the family business – Cribs Creek Outfitters located in Polkton, North Carolina.

“Cribs Creek is an outfitter for wild hog, deer and turkey. Our clients pay us to take them out hunting. It’s a really nice program. They stay with us…we provide food and lodging. It’s seven days a week. For me, it’s talking on the phone, answering emails, and ultimately taking them out hunting. We take ‘em out every day…hunt at night too for kicks. Business is good. This is actually our busiest time of year. It slows up some in the summer and then picks back up in the fall. There are days when I’m up at 4:00 in the morning and don’t go to bed until 3:00 o’clock the next morning.”

Despite the busy days and nights, Lynn is well aware of what’s coming on the versatile ARCA tour ahead, even though he’s never seen most of the tracks.

“I’m really looking forward to those dirt races. I ran dirt once in a Legends car…that’s it. It’s really going to be interesting. It’s going to be cool to go out and mix it up with the guys and mix it up on the dirt.”

When he’s not at Cribs Creek, working out or working in the shop, he’s in class at UNC Charlotte steering toward his Bachelor’s degree. Lynn says that the most interesting classes are a result of the Professor’s delivery and style.

“I prefer the Professors that don’t go straight from books and just reading off PowerPoint’s in class…that puts me to sleep. I like the ones that are more engaged in the class, the students…the ones that get totally away from the books. I find that the ones who make us think, make it interesting based on real world stuff are far more engaging, rather than learning definitions, books and taking tests. You know if the class was engaging if after you’re done with the class, you’re thinking about what he said two hours later.”

Watch both live on Fox Sports1

Not the biggest buck in the woods but not bad for my first. Figured I should shoot one around the house before I go to Kansas. #buckdown #deerhunting #swarovski #savagearms #hunting
Another stud on camera last night. Incredible what kind of deer are out here in Kansas.
Standing up towers
Sitting in the garage drinking coffee. #kansas